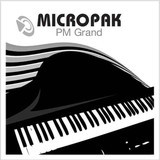 This Micropak contains a collection of 9 advanced instruments and 50 looped clips of various styles. The included instruments contain multi-sampled programs with release and sustain tones, a “lite” version with a much smaller footprint, a reverse piano, an infinite sustained piano and several electrified tones.

PM Grand is available to download for Puremagnetik subscribers. Subscriptions start at $5.75 USD per month.