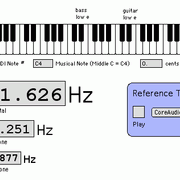 Note2Frequency is a utility program to convert note names to their frequencies. Press a note on the on-screen keyboard, and it gives you the frequency of that note in cycles per second (Hz). It will also play a sine wave as a reference tone.

Now with version 0.4, Note2Frequency will also go the other way, converting frequencies in Hz to notes! A readout for “cents” was therefore added by necessity, to show where between two notes a given frequency lies.