I don’t normally use arpeggiators much. It’s not that I dislike them, I just don’t really need them for producing my music.

That said, I do enjoy happy accidents and I like drawing inspiration from things I would normally not think of doing myself — randomize FTW — so why not give Kirnu Cream a try.

Aarto Vaarala says this plug-in is not like your traditional MIDI arpeggiator or sequencer, rather it is a very powerful MIDI performer, intended to be used in both live and offline DAW usage.

With simple and clever design it has been made easy to learn and operate. You can easily create cool performances by tweaking only couple of controls. If this is not enough for you there are so many ways you can control Cream that you never feel bored with it. 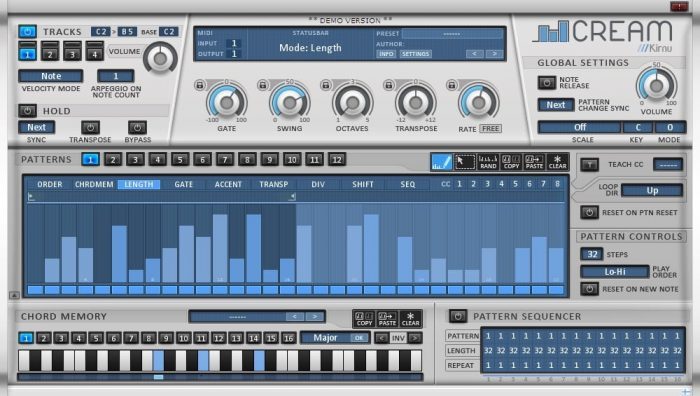 Kirnu Cream is a full featured MIDI performer plug-in for Windows and Mac.

Setting up Cream is quite straightforward. Just load the plugin on a MIDI track, set the output to the instrument you want to control, and feed Cream some MIDI notes. MIDI routing is not the same for all host applications, so if you’re not sure how to do this you can check Arto Vaarala’s YouTube channel for instructions on setting it up with Ableton and Logic.

Kirnu Cream has 4 tracks that can drive individual MIDI instruments with up to 12 patterns each. The patterns feature gate, swing, octave, transpose and rate controls for each of the patterns. These controls can be locked to prevent presets from changing the values.
Each track has the following pattern data screens:

You also get 8 MIDI CC slots in which you can control additional parameters after assigning them with MIDI learn.

Each pattern data screen has up to 32 steps and various play orders, and they can be looped individually with the loop control. Looping is left to right, right to left, or back and forth between start & end, and reverse. The pattern data can simply be drawn in with your mouse, and there are handy copy/paste, randomize and clear buttons. Unfortunately there is no undo/redo.

A pattern sequencer is also included. It has 16 slots in which you can assign the pattern, length and amount of repeats. Cream uses a number of MIDI keys to control pattern data toggles and pattern changes, which follows the global pattern change sync. Cream comes with some 40 scales to restrict the notes used by the arp.

Check this nice demonstration video on how to use Kirnu Cream’s loop points, patterns and the pattern sequencer to create a nice chord progression.

Well, I’m still a bit divided on Cream. While I am well impressed with what it can do, I prefer to simply program my sequences manually. That is, when I know exactly what I am looking for.

I think Cream (and arp tools in general) might be more useful to producers of certain types of electronic music. Arps are a staple of the trance diet, and I can see Cream will definitely be something that can improve/speed up one’s workflow a lot. However, I don’t produce trance.

What does totally click with me though, is using Cream as an inspirational tool. Enter some data in the pattern screens, clicks a randomize button, set some loop points, and voila! It allows me to create sequences that I would never not think of myself. With the right settings you can even use it on drum/percussion instruments to create interesting rhythmic sequences. Being able to control patterns with MIDI is great for live performances, as well as the creative process in the studio.

I would like to point out that I didn’t find Cream totally intuitive. This could be due to my lack of experience with arp tools. The manual explains the basics pretty well and it is worth a read for the shortkeys, but for more hands-on instructions you should watch Arto Vaarala’s YouTube videos.

In short, Kirnu Cream is powerful and inspirational MIDI tool. It goes well beyond the traditional arpeggiator, offering lots of flexibility in programming and performance.