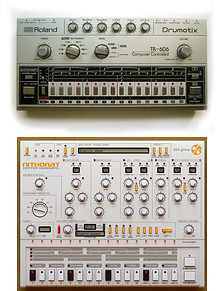 Nithonat is D16 Group’s latest drum machine emulation. After taking on Roland’s 909 and 808 machines they now did the TR-606, a drum machine that was originally designed to be used with the TB-303 bass synthesizer (which has a similar appearance).

Just like the original, Nithonat features 7 sounds (kick, snare, low/high toms, cymbal, and closed/open hihats) and it has a sequencer.

But as you can see in the image to the right, D16 added some extras in this emulation.

If you are familiar with the TR-606 you will notice that Nithonat has more controls for each one of the sounds. Besides the volume level controls — the top knobs on the hardware unit, there are various controls for tune, tone, attack & decay, and “snappy” for the snare sound. These open up possibilities for getting a wider range of sounds, something that is only possible on a real TR-606 with a modification installed.

Much has changed since Roland released the TR-606 drum machine about 25 years ago. One of the biggest changes is that we now have access to software emulations of many of the electronic instruments and effects of the past, often including additional features to the hardware counterparts.

This is certainly true for Nithonat. While the original TR-606 only had one mono output, Nithonat has 8 outputs (mono or stereo), allowing you to map each separate instrument and the trigger signal to any output you like so each sound can be processed individually. The trigger (an emulation of the trigger sound found on analog machines) can be assigned to either one of the instruments or the accent track.

The drum sounds can be played with the internal sequencer or by sending MIDI notes from a host application. The mapping is General Midi Standard compatible by default, but you are free to change that and your custom drum maps can be saved for later use.

The internal sequencer can store up to 96 patterns, divided in 8 banks of 12 patterns. Creating patterns is fairly intuitive. Select the pattern you want to edit, select the instrument track, and simply click on the steps that you want to have the sound triggered on.

You may also tap patterns in “tap mode”, which is a great way of turning the beat you have in your head into a pattern. While the pattern is running you play the step buttons which trigger the drum sounds indicated by the labels above the buttons, or you can use the tap/accent button to tap the selected instrument(s) to record your patterns. Nithonat will automatically quantize your taps to the nearest step. 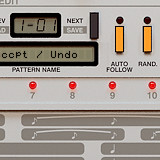 The patterns can be played in native mode, which is great if you are used to the way this works on the hardware, but you can also use the host mode in which patterns can be triggered by Midi notes (C1 to B7).

My favorite feature in the pattern control & edit section is the randomize button. When in randomize mode you can select which instruments are to be included and how intensely they will be randomized. Depending on how pleased you are with the result, you can either save or undo the randomized pattern, and the “previous/next” buttons will let you cycle through the various randomized patterns created earlier.

Since I don’t do live performances much I would normally use Nithonat as a synth module instead of using the internal sequencer, but the randomize function is a good enough reason for me to make use of it anyway. Unfortunately it is not yet possible to drag patterns to your host for additional editing. I think D16 is planning on adding that feature in version 2 of its drum machines.

Nithonat has MIDI output in native and host modes so you can also control external instruments (hardware or plug-ins) with the internal sequencer. That also means that you can use the MIDI output to record patterns to a MIDI track in your host software. So if you have some cool patterns created with the internal sequencer (e.g. by randomizing stuff) you can record them by routing the MIDI output from Nithonat to a new MIDI track.

Nithonat is probably not going to be D16’s most popular drum machine plug-in. Not because it is a bad plug-in or anything. On the contrary, Nithonat does a wonderful job passing off as a 606. I don’t actually own one but I compared the plug-in to samples from the real thing and to me it sounds pretty much alike. The thing is that the sound of the TR-606 doesn’t appeal to as many people as the 808 and 909 drum machines.

D16 added some worthwhile things to the original TR-606 concept, like the randomizing function, multiple outputs, a good preset system, host mode in which you can trigger patterns from your host sequencer, etc.

In short, Nithonat is a great TR-606 emulation. With its additional instrument parameters it provides a wider range of sounds than the original machine. If you are looking for this type of drum machine, I don’t think you can go wrong with Nithonat.