I figured Sequent had something to do with sequences, but English is not my first language so I looked up what it means. According to my dictionary it is something that is in order or succession, or consecutive, following as a result. As an adjective it could be something in regular succession, without gaps.

Sequent — the plug-in, has step sequencers for each effect parameter so I think this is the perfect name for it.

Here’s what the product page says:

Sequent is a modular multi-effects unit, the perfect tool for mangling audio on stage or in the studio. The effects – including a flexible beat looper and a pair of filters capable of self oscillation – can be connected in practically limitless combinations by simply dragging virtual cables between them.

Audio mangling, beat looper, self oscillation… I don’t know about you but this kind of talk gets me all excited!

The signal flow is set up in the routing window in the top middle of the interface. It’s simply a matter of connecting virtual cables to the input, outputs and effect blocks. This provides a simple visual overview of what is going on. 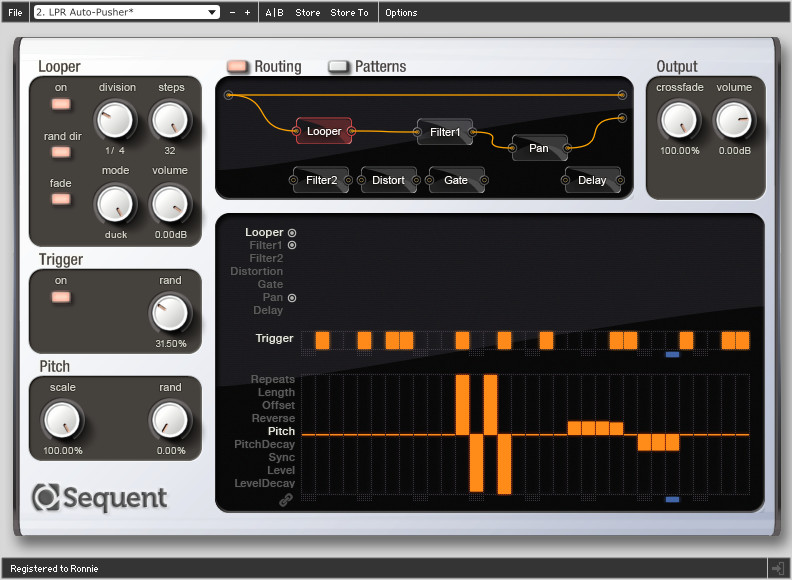 Sequent has a lovely elegant interface, but don’t let that fool you. This thing goes wild!

Sequent has one input (stereo) and two outputs (both also stereo). The top and bottom output can be used to route two separate signals, e.g. a dry and wet output, or two completely different effect chains. The crossfade control sets the relative output of each output. Interesting thing about this is that you can use the crossfade to play one effect chain while you create/modify another one. Moving the crossfade values from 0% to 100% (and back to 0%) basically lets you switch between the two signal flows on the fly.

Once you have set up everything you may want to store Sequent’s state into one of the 12 available patterns. You can copy & paste between patterns in order to create variations or completely new effect chains, accessible from the Sequent interface or by playing MIDI notes (1 octave = 12 patterns). Sequent has a simple MIDI Learn system so assigning parameters to your controller is a breeze.

To get a better idea of what Sequent can do I made a little video demonstration.

Sequent is seriously good stuff. If this was food I would eat it for breakfast, lunch, and dinner. High quality effects, a flexible modular structure, various randomize options, easy-to-use sequencers… what’s not to like?

Suitable for both subtle manipulation as well as extensive FSU processing, Sequent is a versatile tool that will look good in any producer’s plug-in folder.

Just do yourself a favor and check the demo version.