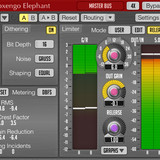 Voxengo has released version 3.6 of Elephant, a compressor effect plug-in for Windows and Mac.

The most remarkable feature of this signal limiter is its ultimate transparency. Elephant brings sound limiting and loudness maximization without any audible “pumping” effects.

Elephant is a highly competitive plug-in for mastering applications: it features a variety of limiter modes that can be deeply customized, and a comprehensive set of level metering tools. Elephant’s built-in linear-phase oversampling is a new standard in quality peak limiting and loudness maximization.

Elephant is available to purchase as an effect plug-in for Windows and Mac (VST/AU), priced at $130 USD.