If there is one type of effect I can never get enough of it is the delay. So I am always excited to see a new delay plug-in, especially when it is one that comes from the Rob Papen stable.

RP-Delay is not just some simple delay either. Papen’s developer Jon Ayres managed to code some refreshing ideas into this effect plug-in for Windows and Mac.

Let’s take a look at a screenshot of the RP-Delay and walk through some of its features. 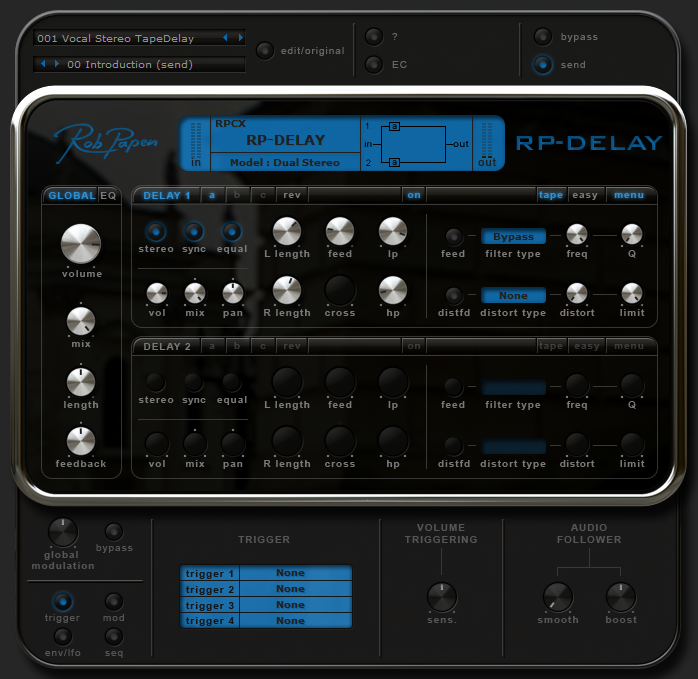 The center of the screen houses lots of knobs for setting up the 6 delay lines which are grouped in two sets (a/b/c for both delay 1 & 2).

These delays can be routed in a number of ways to create various distinct delay models: mono, stereo, dual stereo, channel split, split multi, serial multi, parallel multi, full serial, and reverse. The desired model is selected from a list in the read-out screen. An illustration of the current signal flow also appears in this screen, a practical way of seeing how the delay lines are set up. The read-out screen also shows parameter values when hovering over or modifying controls.

Each set of delays has a tape mode, simulating the analog tape delay effect. In this mode you can change the delay length by setting the tape speed, resulting in a smooth transition between delay times (unlike digital delays, which may produce clicks/pops when changing delay length).

The delays each have a number of controls, including delay time/length, sync to host, multi-mode filter with 13 filter types, a distortion effect with various models, and more. If you feel overwhelmed or you just want the basic overview of the delay settings, there is the easy tab which switches to a panel with just the basic controls.

A rather interesting feature is the reverser module. Both delays have one of these, allowing you reverse the sound at any stage of the signal flow (after the input, a specific delay line, or the output). The signal that is fed into the reverser is reversed in chunks of the length you set it to. Reversers can run free or you can trigger them in various ways. Great for experimental effects.

Moving to the bottom part of RP-Delay’s interface. Four button in the bottom left reveal controls for the following sections: trigger, envelopes/lfos, modulators, and sequencers.

Right above the panel selection buttons there’s also a knob which will let you set the global modulation from -100% to 100%, and a bypass button to turn modulation off.

Is your head spinning from all these options? Let’s move back to the top of the interface.

RP-Delay comes with 5 banks of presets – both as insert and send, ranging from simple delay effects to some crazy wild stuff (I’m looking at you, John). The presets are really well done and useful, and browsing them is a great way of learning how to use RP-Delay.

I made some quick examples to demonstrate the plug-in’s versatile palette of effects.

RP-Delay includes some of the goodies also found in other Rob Papen plugins, like the Quick Browser, Recently Browsed and Favorites functions in the presets section. The edit and original buttons in previous plugins turned into one “edit/original” toggle button. It will light up once you start modifying a preset, and clicking it will let you return to the preset’s original state.

After setting up your external MIDI controller for use with RP-Delay you can save and load the setup from the EC menu (not sure why it’s not called ECS like in other Papen plugins). There’s a quick manual link in the interface, and you can bypass the delay or switch between insert and send (wet only) with the click of a button.

To the left of the controls for the delays there are some controls for setting the global volume, delay length and feedback (for all active delays) and the dry & wet signal can be mixed (only with insert mode). A three band equalizer is also included.

Lastly, it might also be good to know that most of Rob Papen’s products have moved from (soft)-eLicenser to serial protection. RP-Delay also uses this new system.

RP-Delay is a proper Swiss Army Knife type delay. Not this one, but something like this.

It is extremely versatile, offers some great routing and modulation options, and yet it is still easy to use. The reverser module is a nice addition, a delightfully creative tool that sound designers will undoubtedly enjoy.

Rob made sure RP-Delay is loaded with a wide range of useful presets so if you feel a bit intimidated by the plug-in’s many controls and options you have a great guide to learn from.

It is also worth mentioning that RP-Delay is included with RP-Verb, a flexible algorithmic reverb effect plug-in which has been getting some positive reviews (have not had a chance to check it myself), so if you’re in the market for a new reverb you might want to check that one out as well.

Rob Papen’s website has more audio demos and you can request a free demo version of RP-Delay to give it a try yourself.