Sample libraries have become quite a commonplace. Every other day you see new titles popping up in various genres and formats, many of which seem to be almost copies of one another. If you are looking for drum machine sounds or Fidget House loops there certainly is plenty out there to satisfy your every need.

But what if you want something else… a unique sound, a unique instrument?

Fortunately there are still some companies offering fresh sample and instrument libraries you are not likely to find anywhere else. Les Productions Zvon, Cinematique Instruments, Tonehammer, and Soniccouture are some that come to mind.

With their latest release Glass Works, Dan and James of Soniccouture have delivered yet another stunning example of the beautiful, rare and unusual instruments that are less commonly sampled.

For the first two of these instruments Soniccouture went to Paris to meet with Thomas Bloch, a musician and performer of rare instruments whose notable collaborations include Radiohead, John Cage, Tom Waits, and Daft Punk. The Cloud Chamber Bowls, an instrument by maverick American composer Harry Partch, was so hard to find that Soniccouture had to recreate it.

Le Cristal – designed by Bernard and François Baschet in 1952 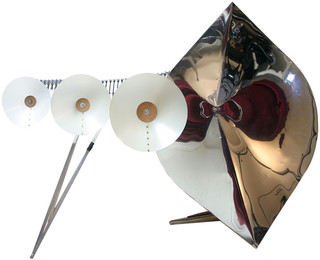 Upon first sight Le Cristal (or Cristal Baschet) doesn’t really look very “glass”. It has a huge alien face shaped plate called the “flame”, and a large part of the construction is made of metal.

On closer inspection (click the image to the side) you’ll notice a number of glass rods, which produce sound when rubbed with a wet finger.

The vibration of the glass is passed to a heavy block of metal, which itself is tuned and in fact determines the ﬁnal pitch. The entire mechanism is ampliﬁed by a large steel plate called the “ﬂame”. There are also three small ﬁberglass cones that amplify the higher frequencies.

Just over 4 octaves of notes were sampled with various articulations:

The samples are mapped across 11 Kontakt instruments. All articulations – triggered by keyswitches – are available in the Complete instrument patches. Modwheel or velocity can be used for crossfading between soft and loud samples. The articulations are also available as separate instruments so you can save on memory usage and process each articulation differently if you like.

The Kontakt interface features a number of controls to further shape the sound of the Cristal Baschet. You get lowpass and highpass filters, attack and release, delay send, and some controls for the flame. Soniccouture sampled some impulse responses from the flame on the Cristal for use in Kontakt’s convolution processor. Sweet!

A second page on the Kontakt interface lets you assign all of the knobs on the front panel to MIDI CC so you can modify parameters in real-time with a hardware controller.

The armonica is an instrument that also generates sound by rubbing a wet finger on glass, this time a series of glass bowls in various sizes. 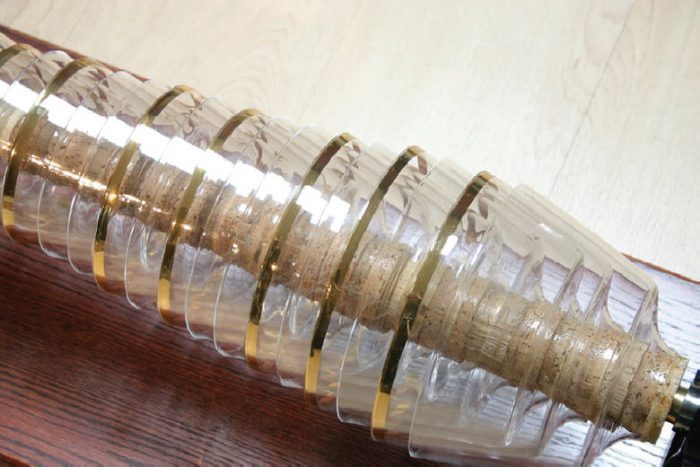 The Glass Armonica recorded by Soniccouture is a recreation of the original Ben Franklin instrument built by master glassblower Gerhard Finkenbeiner. This particular model has 37 nested bowls that range from F3 to F6. Note: the Kontakt instrument is mapped an octave lower for convenience.

Each note of the Glass Armonica was sampled three times at two different dynamics, soft and loud. The Kontakt instrument panels feature the same controls as the Cristal Baschet, except there is no flame. Instead you get some other convolution reverbs and there’s a Keyoff control which lets you modify the level of the sound produced when releasing a note.

This instrument is more appropriate if you want to use the Glass Armonica as a synth pad or something less natural. We provide a lot more front panel control, as well as Filter Envelope (FEG) and Delay.
Also, in this version, instead of using a Round Robin sample alternation we layer two different Glass Armonica sample sets together, which can be detuned using the Detune knob in the middle (this also defaults to the Mod Wheel in this instrument). 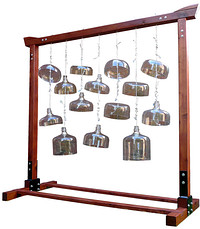 This instrument consists of 14 bowls — sections (tops and bottoms) of 12-gallon glass carboys — hanging in a wooden frame. Soniccouture created its very own Cloud Chamber Bowls instrument, having all the glass and wood parts made from scratch.

The name “Cloud Chamber Bowls” arose from the fact that Partch found the original tops and bottoms at a Radiation Laboratory at UC Berkeley in 1950. The bowls were originally used for cloud chambers used in tracing paths of subatomic particles. The original pitches of the bowls are basically random, as were Partch’s (“It has been impossible for me to tune the bowls – I must accept what I get.”). The varying thickness of the carboys and unpredictable overtone structure make it pretty much impossible to cut a carboy to an exact pitch.

Soniccouture’s Cloud Chamber Bowls features an instrument with original pitches (random like Partch’s instrument) and a chromatically tuned version. The instruments feature the sounds of all 14 bowls
played with soft mallets and 13 bowls hit with hard mallets (unfortunately one bowl broke).

The instruments have some of the same controls we’ve seen on the other Glass Works instruments. Additionally there is also a Jammer panel available (see image above).

This lovely KSP script is also available in a number of previously released products like the Pan Drum and the Skiddaw Stones so might already know what it does.

The Jammer is a kind of random arpeggiator that chooses from the notes you play into it at random. Hold a chord down on your keyboard, and Jammer will randomly play notes from that chord.

A third panel allows for setting MIDI CC for the various parameters so you can use your hardware controller to modify parameters in real-time.

Glass Works won’t have the same wide appeal as the drum machine sounds or Fidget House loops I mentioned earlier, yet Glass Works is truly a stunning collection of instruments. The sampling is done to Soniccouture’s usual high quality standard and they have managed to really capture the beautiful sounds of these rare instruments.

The Kontakt instruments are very well done (plenty of velocity layers and round-robin) and include lots of useful controls to further shape the sounds. The Cristal Baschet is probably my favorite instrument, although I am also really liking the sounds of the Glass Armonica Doubled Synth.

Glass Works will no doubt find its place in many cinematic and experimental works.

The Soniccouture website has a video of Thomas Bloch doing an improvised performance on Le Cristal so head on over there to check it out.