Sugar Bytes’ latest offering takes another spin on sequencer driven sounds. Obscurium is a synthesizer that was designed to be immediate and intuitive.

Obscurium is a timbral organism, a generative synthesizer feeding on scales, chords and classic synthesis producing vivid harmonics paired with an elaborate aesthetic. It is the source of a dazzling array of organic and lively sounds, delivering spherical pads, bubbly arpeggios and deadly percussion attacks.

What we have here is basically a 2 oscillator synthesizer with a sequencer that controls parameters for the oscillators, filter, and things like arpeggiator, modulator, pitch, chord, and polyphony. 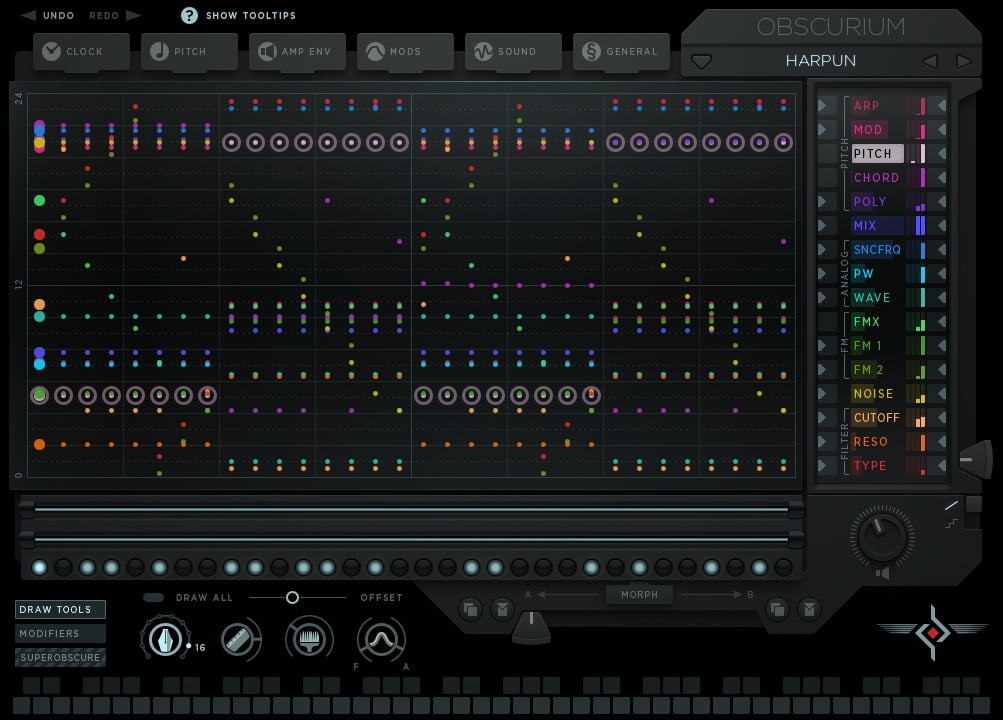 As you can probably tell from the interface, there are many controls. I could write about each and every one of them in detail, but Obscurium already comes with a comprehensive manual that explains everything really well, so I will try and give you a short overview instead.

The part of the interface that likely caught your eye first is the large motion lane sequencer. All the colorful dots in this main 32-step sequencer control the 16 flexible parameters of the same color on the right.

There are two of these motion lanes, which you can morph manually or have modulated by LFO, an envelope via MIDI or a simple step sequencer. The settings for the morph slider also control a Parameter Shift slider on the right of the flexible parameters. This slider changes up assignments, so the motion lane curves will control different parameters.

Further down are some draw tools for the motion lane sequencer, a bunch of handy modifiers for changing the existing data, and a superobscure mode that generates new sequences on its own.

The sound engine of Obscurium is a bit limited by design. I much like the type of sounds you can get from it, but it is good to know that Obscurium can also host 3rd party VST plug-ins. Sugar Bytes offers this plug-in hosting as an experimental sound-design feature. They say it doesn’t always play nice with older plug-ins, but I tried a few from u-he and Native Instruments without any problems.

Check out the overview video below to see Obscurium in action.

When opening Obscurium for the first time and flipping through some presets, I didn’t totally get what I was looking at and how to control it all. The interface sure looks gorgeous, but there is so much going on that it wasn’t until I had a quick look in the manual that things started making sense. Obscurium actually has some great tooltips, but I totally forgot to use them when I first checked the synth.

I really like what Sugar Bytes has done here. While it has a bit of a limited sound spectrum, the combination of generative synthesis, motion sequencers and lots of modulation features, offers complex movement and unique sounds. With plug-in hosting your options become almost limitless. I say almost because Obscurium only hosts VST plug-ins, and only 64-bit plug-ins when using the 64-bit version of Obscurium (likewise for 32-bit).

After getting familiar with Obscurium it is easy to use, and fun too. You can go real deep and meticulously program sounds, or simply draw some random dots, move the parameter shift slider around, or use the superobscure mode to generate completely new stuff you would not think of creating yourself.

It is safe to say Obscurium is not going to be everyone’s cup of tea. I think it is great for sound designers and musicians who like to make rhythmic patterns, evolving sounds, or interesting sound fx.

Obscurium is available for Windows and Mac (VST/AU/AAX/standalone), priced at $99 USD / 99 EUR. You can get a free demo version and see how you like it.