The first titles in the Traveler Series include two fiddles and the Bodhrans & Bones percussion library.

The bodhran is an Irish frame drum with an open side so one hand can be placed against the inside of the head to control the pitch and timbre. It is struck either with the bare hand or a variety of “tippers” and is said to have been developed as the “poor man’s tambourine” by farmers who couldn’t afford the metal.

Bones are an instrument often used in traditional Irish folk music, as well as Bluegrass and zydeco. It consists of a pair of animal bones or pieces of wood played by holding them between the fingers and moving the wrist in such a way that they knock against each other.

Red Room Audio teamed up with bodhran maker Marcin Oracki of Mighty Bodhrans to record 6 unique Irish bodhrans and 2 sets of bones at the Herbert Place Studios based in Dublin, Ireland.

The recorded bodhrans vary in size from 15.5 x 6 inches to 12 x 4 inches. With various shell materials and skins used, each bodhran has its own distinctive sound and character. 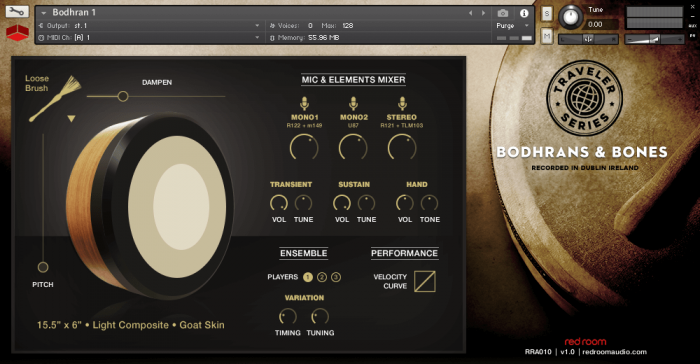 Using a wood tipper, hotrod tipper, loose brush, tight brush and fingers, each bodhran was deep-sampled striking five zones of the bodhran. The Kontakt instrument uses several dynamic layers and round robin samples, and multiple mic positions can be mixed from the instrument panel.

A so-called “Frankensampling” approach was used to provide realistic pitch and dampening control with individual transients and sustains. This emulates the hand placement inside of the head to get a realistic re-pitching effect. The slider controls are on the left side of the interface alongside the stick type selector and drum zone illustration, which lights up the strike zone of played notes.

The volume and tune/tone of transient and sustain samples and hand movement samples can also be adjusted and you can create ensemble sounds with up to 3 players.

The drum zones are sensibly mapped with all open hits on one octave and a section with the damped hits on the next octave. A third bonus zone is designed for fast, simplified performance with fully open, half-damped and fully damped center hits only.

Sporting a similar interface, the Bones instrument brings the sounds of two bones sets, each mapped on different octaves of the instrument. 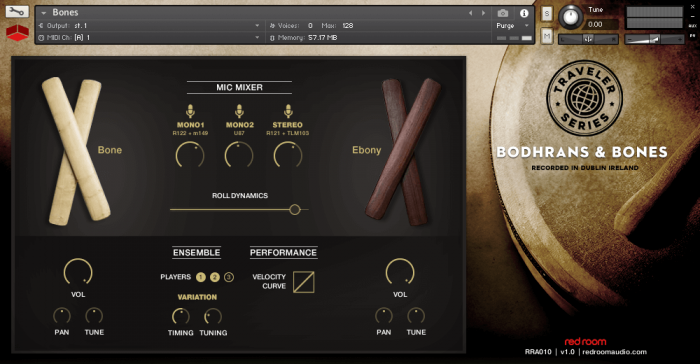 The bone and ebony sets also have controls for mixing the various microphone positions, volume, pan and tune, as well as ensemble and velocity curve.

Additionally, there’s a slider to control the dynamics of the rolls.

Red Room Audio’s custom FX Rack is included with all the instruments in this library. 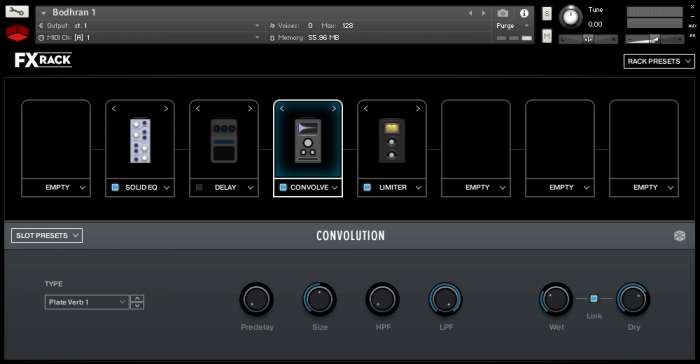 The rack comes with common audio processing tools (reverb, delay, compression, EQ, etc.) and you can easily add them and move them around in the audio signal.

Bodhrans & Bones requires the full version of Kontakt 5.7 or higher, and you can purchase it for $49 USD from the Red Room Audio website.

This isn’t the only frame drum sample library out there, but it is definitely one of the most comprehensive ones. With its pretty, intuitive interface and beautifully recorded instruments, the attention to detail and quality is apparent.

The way you can change pitch and dampening of the bodhrans allows for truly realistic performances, and with such ease. The various types of drums and articulations offer a surprisingly wide palette of sounds. In contrast, the bones instrument is quite limited, but it fits the authenticity the Traveler Series is all about perfectly and is a nice addition to the library.

For a detailed overview of the instruments you can check the walkthrough video by Red Room Audio’s Dickie Chapin below or visit the website.