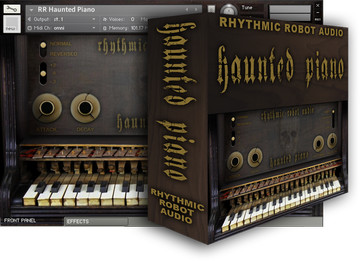 Haunted Piano is created from multiple samples of two toy pianos which between them span a full three octave range. We sampled them at midnight, by candlelight, when the moon was full (and at 24-bit, natch). Using three velocity layers and two round robin sets, we created an eminently playable and responsive virtual toy piano, which can sound just as clunky and naive as the originals.

But then we went a bit further down the spookiness path, pushing the sound of the virtual instrument into sound-design territory. The samples can be reversed with the click of a button, to give eery builds and surprise tones, or to recall those “backwards masking” moments so favoured by demonic rock bands. They can also be force-transposed down by three octaves for groaning, bottom-of-the-sea, sepulchral noises and cavernous drones; or pitched up two octaves for tiny, sparkling fairy-bell sounds that glitter and gleam.