Rhythmic Robot has announced the release of a faithful Kontakt recreation of the world’s very first drum machine, the tape-based Chamberlin Rhythmate. 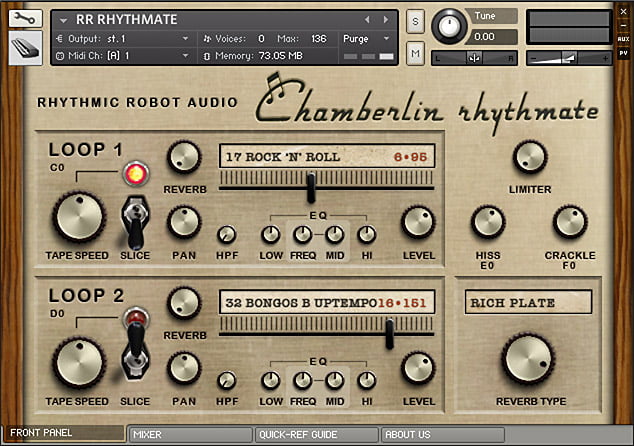 The Rhythmate used looped recordings of real percussion performances, running on 1″ tape, to create backing rhythm sections; sliding the tape head across the tracks gave access to different patterns (and, sometimes, mashups of two patterns when the head got lodged halfway). The patterns could be varispeeded up and down to the tempo of your choice, though of course with inevitable pitch-shifting as well; and the whole thing was done up in a tasteful wood veneer.

Our Kontakt version does two thing. Firstly, it faithfully recreates the authentic Rhythmate tape loops, complete with varispeed; so if you want the authentic sound of the original, it’s here, with all its patterns, in all its glory. You can set two loops going simultaneously (to create the original “tape head lodged between tracks” glitch) and you can filter and adjust the loops to taste. Perhaps more usefully, you can both varispeed and beatslice them, giving you the choice of either matching your track’s tempo by shifting the pitch (authentic operation) or by slicing the beats (modern operation)… or a combo of the two. In short, you can lock these patterns to your DAW tempo as perfectly or imperfectly as you wish.

Secondly, though, we’ve extended that authentic functionality considerably, by harvesting over 1000 individual drum and percussion hits from within the loops, and mapping these – with multiple round-robins – to the MIDI keyboard. Using these, you can create brand new loops which are nevertheless stamped with the Rhythmate’s unique sonic fingerprint (which is, basically, the sound of 70 years of hot oxide). This makes our Rhythmate a fantastic resource if you want the thick, compressed sound of the original tape Rhythmate, but want to harness its sound to your own drum patterns.

Oh, and there’s compression, convolved Spring and Lexicon reverbs, additional Hiss and Crackle controls for help glueing your beats together, a full kit-piece Mixer pane with EQ and FX sends, and tons more.

Rhythmate for Kontakt is on sale for the intro price of 20 EUR (regular 25 EUR). Prices ex. VAT where applicable.