RME Audio has presented the new HDSPe MADI FX PCI Express card at the Musikmesse 2012 in Frankfurt (Hall 5.1 B80).

The MADI FX marks a new milestone both in the history of audio interface cards and within the long series of outstanding RME devices. Never before has such a high-performance multi-channel audio system existed. 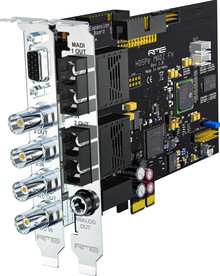 The HDSPe MADI FX features 390 audio channels! Three MADI I/Os – two optical and one coaxial – are accompanied by one AES/EBU I/O and one analog monitoring output.

The HDPSe MADI FX introduces a newly developed modular Hammerfall Pro Audio Core. The high-tech core will process three times as many channels as the channel count of the previous MADI flagship, while actually reducing the system load and enabling ultra-low latencies on modern computers.

The new core technology is accompanied by a special version of TotalMix FX, which allows using the enormous channel count efficiently, and a faster DSP. The integrated 192 kHz RME effects engine allows latency-free monitoring with numerous effects directly on the hardware of the card, independent from the DAW software in use.

The card can be used as powerful MADI router. Unlike most other router solutions, each channel can be routed individually – even with separate level settings for each routing.

With the new Seamless Redundancy Operation the card can operate as single MADI input device, recording up to 64 channels. As soon as the current input fails the audio data received from one of the other two inputs is used. The audio data is not interrupted when switching to another input – and the card can use not only one, but two more MADI sources for redundancy.

The HDSPe MADI FX will start shipping in May 2012.