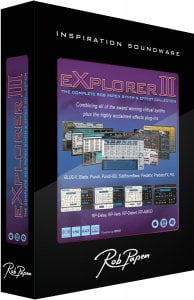 Rob Papen has announced special deals on upgrading to eXplorer-III, the bundle of all Rob Papen plug-ins.

eXplorer-III, The Complete Rob Papen Synth & Effect Collection, combining all of our multi-award-winning Mac- and PC-compatible virtual instruments — including the recently-released RAW soft synth specialising in ‘distorted’ sounds specifically suited to electronic dance music production (and beyond) — and our critically-acclaimed effects plug-ins into an attractively-priced performance and sound design dream bundle to die for, has become an essential tool for many of today’s top music producers!

But why not take full advantage of our Inspiration Soundware to put a musical spring in your step this Spring by upgrading to the amazing-sounding and amazingly-inspirational bundle that is eXplorer-III!

And there’s truly no better time to do just that than now, thanks to the following eXplorer-III upgrades being on offer until the end of May 2015:

Important note: ANY already-owned Rob Papen products assume ‘Not For Resale’ status when upgrading to the eXplorer-III bundle.