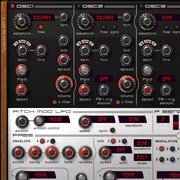 Rob Papen has released version 1.6.1b of Predator, a synthesizer instrument plugin for Windows and Mac.

Predator is used in many contemporary studios as a standard goto synth. A real production beast!

This is not only because of its phat and organic sound, the userfriendly interface, but also because of the many musical and inspirational presets!