ROLI has announced the release of Equator2, extending Equator’s leadership in MIDI Polyphonic Expression (MPE) focused sound design while adding a wealth of new capabilities that put it on par with the most advanced, fully equipped synths available to music-makers today.

Years in the making, ROLI’s new flagship synth marks a coming of age for MPE. The launch of Equator in 2015 pioneered a new approach to expressive sound design — though primarily on the ROLI Seaboard for which it was created. Equator2 offers a vastly expanded range of tools for shaping MPE sounds, and is now part of a much larger MPE ecosystem. 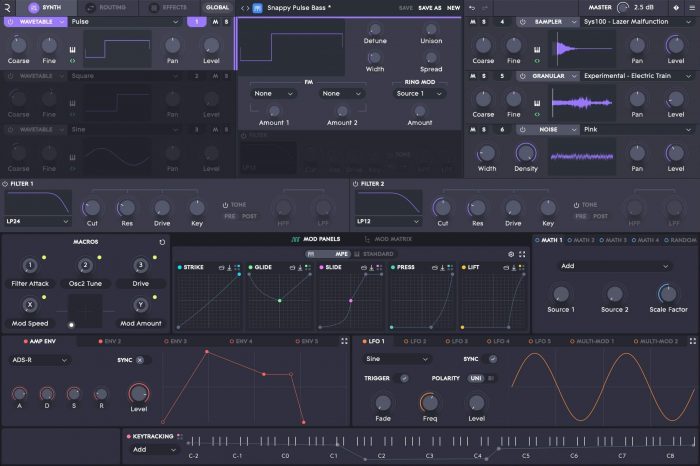 “Ever since I invented the Seaboard over 10 years ago, we’ve worked to develop sound engines and sonic approaches that realize the expressive potential of the instrument. Our approach to expressive electronic music — as embodied in the Seaboard — helped support the development of MPE and a whole new range of MPE-optimized hardware and software instruments.

Now a decade into this trajectory, we’re realizing the world’s first true flagship MPE synth engine: Equator2. It can go head to head, feature by feature and preset by preset, with the best sound engines and plugins in the world. But it also has unparalleled capabilities for shaping sounds multidimensionally through expressive touch. The release of Equator2 is an important milestone for expressive electronic music.”

Comprehensively expanded and upgraded, Equator2 has an array of new features including:

“Equator2 is a distillation of all we’ve learned at ROLI and FXpansion about expressive instruments and multidimensional MPE synthesis. Whether you’re already using an MPE controller like the Seaboard or a conventional MIDI keyboard, Equator2 is a deep and powerful synth that puts expressive sound design at your fingertips.”

Available on Mac and Windows in AU and VST formats, Equator2 is available for a launch price of $199 USD for a limited time (regular $249 USD). Owners of Equator, Cypher2, Strobe2, and ROLI Studio can upgrade to Equator2 for $99 USD, discounted from the normal upgrade price of $149 USD.