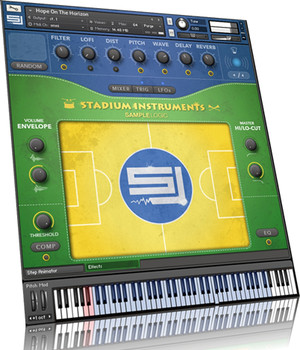 Sample Logic has announced the release of Stadium Instruments, a sample library featuring a collection of traditional and morphed stadium crowd instruments for Native Instruments Kontakt.

For the 2010 world cup we brought to you the amazing Vuvuzela library. Now in light of the 2014 world cup, and by popular demand, we are proud to bring to you STADIUM INSTRUMENTS – an in depth collection of over 300 traditional and morphed stadium sports inspired instruments. This library is the most complete collection of traditional and morphed stadium crowd instruments.

The core of the STADIUM INSTRUMENTS library is centered around blurring the line between music and sound design, which is defined in the hundreds of morphed sounds we created, each of which fits all genres of music production. In creating this product, we used the traditional sounds of various instruments generally found in sporting events and stadiums to produce and mutate new cutting-edge morphed instruments. To top it off, there is a small collection of acoustic instruments untreated for your pleasure.

The library is available for purchase for $49.99 USD.