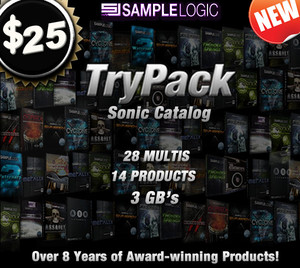 Sample Logic has announced the release of TryPack – Sonic Catalog, an all new sample library for Native Instruments Kontakt.

How would you like to check out the wide world of Sample Logic before you take the plunge and slap down your hard earned cash? Now you can with the ALL NEW Sample Logic TryPack Kontakt sample library for only $25!

The Latest version of TryPack is here! TryPack – Sonic Catalog
Sample Logic is proud to introduce the all new in depth TryPack sonic catalog for Kontakt 5 that allows you to test drive a selection of instruments from our 14 award-winning products.

TryPack delivers nearly 3GB of content celebrating over 8 years of “blurring the line between music & sound design.” This sonic catalog contains 28 multis (2 multis per product) from 14 different Sample Logic sample libraries. Even if you already own some of these libraries, at $25, TryPack is the best way to sample all of “our logic”. If you already own a previous version of TryPack you are still definitely going to want this. The new TryPack is a completely redesigned sonic catalog containing all new and different instruments previously not included in TryPack!