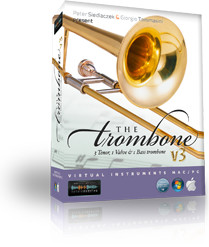 Samplemodeling has announced the release of Trombone 3, a virtual trombone instrument created by Peter Siedlaczek and Giorgio Tommasini.

The programming moves further away from conventional libraries, by exploiting physically-oriented modulation of the recorded sound. The result is a playable, very expressive virtual instrument retaining the rich, full sound of a real trombone.

Trombone 3 (includes three Tenor, one Valve and one Bass Trombone) is available to purchase for 159 EUR. Trombone 1 owners can purchase the new Trombone 3 for 30 EUR.

In addition, all customers who bought the Trombone 1, whether alone or in a bundle, after June 30th 2013, are entitled to purchase the Trombone 3 for only 20 EUR. Prices excl. VAT.