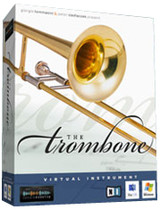 Samplemodeling has announced the release of The Trombone, a Kontakt 4 Player powered virtual Trombone instrument.

The Trombone family expands Samplemodeling™ technologies beyond the original limits. An entirely new class of Harmonic Alignment has been developed, allowing continuous transition across virtually infinite dynamics, at the same time perfectly preserving the peculiar, “spiky” waveform of this instrument. Multi-microphone anechoic recording, coupled to a specially devised “early reflections” impulse response, allowed to reproduce the full, rich timbre of the instrument including its radiation pattern, adding at same time a virtual space to the anechoic sound.

The Trombone is available to purchase for PC and Mac, priced at 149 EUR excl. VAT. All registered owners of any Samplemodeling instrument will be entitled to a 10% discount when purchasing The Trombone, a special offer that is valid until July 31, 2010.