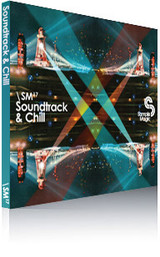 Soundtrack & Chill delves deeper than ever with 600+ loops and shots aimed at soundtrack, chillout, downtempo and ambient producers from motion picture composer James Johnson, featuring a mix of live and synthetic material, alongside field recordings and genuine 18th century spoken word and vocal clips for a truly original voyage into the late-night slow lane.

Soundtrack & Chill is now available to purchase as a download from Sounds To Sample for £49.95 GBP. The DVD version is coming soon.