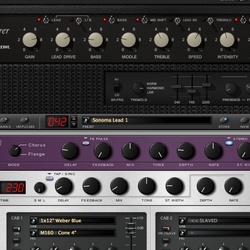 Scuffham Amps has released version 2.25 of S-Gear, the collection of guitar amps, speaker cabinets and effects for Windows and Mac.

The really special thing about S-Gear is the amazing high quality of guitar amp tones achieved simply by plugging your guitar into a computer via an audio interface. S-Gear gives you a professional guitar sound without the expense and hassle. We are talking about the sound of a high quality tube amp, turned up loud, and mic’d up professionally in a suitable acoustic space. S-Gear’s four boutique designed amps, coupled with accurate convolution based speaker cabinet emulation, provide a massive range of guitar tones.

S-Gear for Windows and Mac is available to purchase for $99 USD excl. tax.