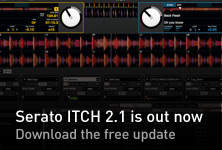 Serato has updated its ITCH dj software to version 2.1.

The latest version features enhancements and bug fixes for all Serato ITCH users with 2.1 offering improved stability and increased performance.

The ITCH 2.1 update is now available to download at no cost.