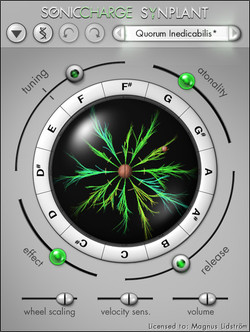 Sonic Charge has released version 1.0.1 of Synplant, an innovative software synthesizer with a genetic approach to sound creation.

Instead of creating patches the conventional way by turning dials and knobs, Synplant lets you explore a world of organic sounds by planting seeds that grow into synth patches.

Sonic Charge has also released Crop of Year One, the first new patch package since the release of Synplant last year.

This package separates the wheat from the chaff among a year’s worth of patch cultivation. 163 patches created by Az’re-ul, elv, Elxicano, eXode, Hint, Magnus Lidström, rsmus7 and Tore Jarlo.

Crop of Year One is available as a free download for all registered Synplant owners.