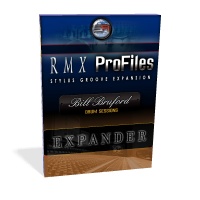 These loop collections from the Studio ProFile series feature legendary studio drummers playing acoustic drum grooves with their unique style and feel. All paks are available now EXCLUSIVELY in downloadable delivery at http://www.esoundz.com.

These new Groove Expanders for Stylus RMX are available for download now for $69 USD each.