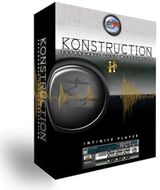 Sonic Reality has released Konstruction, a powerful and easy to use expandable loop workstation featuring thousands of 24bit Rex files conveniently mapped across the keyboard in song style “construction kits”.

Loops instantly follow the tempo of your host sequencer and can be triggered simultaneously from the keyboard in any combination. Riffs, grooves and effects from acoustic and electronic drums, percussion, bass, guitars, vocals, horns, strings, keyboards and synths are included for instant song creation and the ultimate variety of inspiration. Konstruction can be used for a diverse music styles from Hip Hop to R&B, Pop, Rock, TV, Film and Game Scoring, Electronic Music and more! It can be further expanded with downloadable Konstruction Paks which are additional sound collections themed by specific styles of music.

Konstruction is available in two versions: