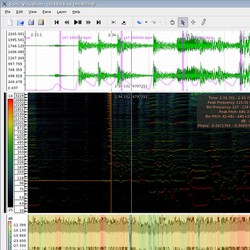 Chris Cannam of the Centre for Digital Music at Queen Mary, University of London, has released version 1.7 of Sonic Visualiser, an application for inspecting and analysing the contents of music audio files, combining powerful waveform and spectral visualisation tools with automated feature extraction plugins and annotation capabilities.