Soniccouture has announced the release of the Estey Reed Organ, a 1.8GB sampled 19th century pedal organ. The Kontakt Player instrument is available as a free Christmas gift. 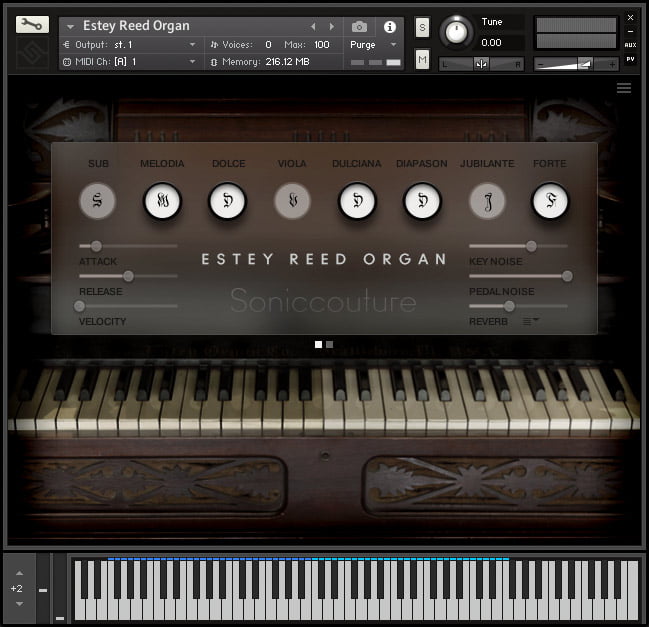 Pedal-powered reed organs (often referred to as pump organs) were once the most popular instruments in the USA. Manufactured by the Estey Organ Company from 1860 onwards, they were often housed in ornate and elaborate pieces of furniture.

The organ we have recorded appears to be a high-top Grand Salon Organ, dating from around the turn of the 19th century. It is played, as you might expect, by pumping the two foot pedals alternately, to force air through the reed mechanism. It requires some technique, and no small amount of effort to keep a strong, even tone from the instrument.

We recorded the Estey Organ by removing the back panel, which gave a more direct sound, and minimised the considerable pedal noise. We have included separate pedal noise which can be blended in (or not) for realism.

The instrument is only available for free until December 31st, 2016 (regular 59 EUR), to coincide with Soniccouture’s Christmas sale. Kontakt Player licenses are limited, and subject to availability. To download the Estey Reed Organ for free enter coupon code ESTEYFREE at checkout.

From December 23rd through December 31st, you can save up to 50% off Soniccouture’s products in its Christmas Sale.