Following the release of her UK number one album, The Hope Six Demolition Project, English singer-songwriter and multi-instrumentalist PJ Harvey has been out on the road, headlining some of Europe’s most prestigious music festivals to much critical acclaim.

Her summer touring schedule, along with her 9-strong band of world-class musicians, has included appearances at the likes of Glastonbury, London’s Field Day, Primavera Sound, and Rock Werchter to name but a few. PJ Harvey’s vocal microphone of choice on these shows is a Sennheiser super-cardioid MD 431. 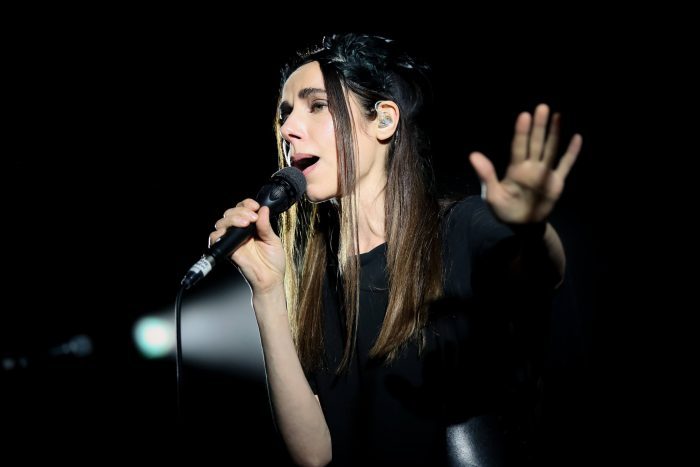 Harvey’s Front of House engineer is Howard ‘Head’ Bullivant, who has been working with her since 1990 when he recorded her first demos and co-produced her debut album Dry. Since then, he has worked as producer, engineer or mix engineer on five PJ Harvey albums, plus a number of other live and collaborative albums.

He toured as mix engineer on her first tour in 1992 and has been involved in almost all of her live shows since 2003. He has been specifying Sennheiser microphones even longer.

“I originally chose the Sennheiser MD 441 for her vocal simply because it’s a fantastically versatile microphone, great for vocals and just about everything you choose to point it at,” he says. “Polly [PJ Harvey] used it on some of the vocal recording on her latest Hope Six Demolition Project album and in rehearsal, so it was always an option for the live shows, but in the end, when the whole PJ Harvey production was set up with nine musicians on stage and 23 monitors, we thought that the MD 431 had slightly better rejection, and Polly choose it above the MD 441 to use for the festival shows. This is a show where the audibility of the vocal is crucial. I constantly recommend the MD 431 to other engineers. That’s the best I can say…”

Monitor engineer Magali Couturier, who is new to the PJ Harvey team but has been using Sennheiser microphones since she started working as an engineer in 1994, comments: “We use the MD 441 as vocal mic because of the sound and the look of the mic. The filter and boost have very nice attributes. We also use the MD 431 because, as Head says, it’s easier to use in loud environments and with her band. And I’m using Sennheiser’s 2000 IEM system because they are the best, with precise sound reproduction and no drop outs.

“We have had a lot of help getting the right mics for our instruments, radio equipment, and IEM equipment. I can’t speak highly enough of the Sennheiser team, they have been extremely helpful and supportive. Our production is not a usual show.” Directed by renowned British theatre director Ian Rickson, dressed by Ann Demeulemeester, with lighting by Adam Silverman and set design by multi-media artist Jeremy Herbert, the PJ Harvey live show is receiving rave reviews around the world. “We are pushing the limits of what is possible on stage and have been very happy with the support we have had.”

“I also switched James Blake onto an MD 431 last year for his festival shows,” says Head. “I have been working with James since 2012, touring extensively worldwide since mid-2012, including the whole of his “Retrograde” album tour. James has a slightly unusual stage set-up changing between two keyboard positions for different songs. This means that one of his monitor wedges is pointing at the mic at any one time. Combined with the dynamic changes of this show – alternating between extremely intimate quiet songs, to heavy dub-step and electronic dance tracks – I found the 431 coped very well with this without compromising vocal quality. Sennheiser e 904 & e 614 are used on the drum kit.”

“Earlier this year I switched Natasha Khan ‘Bat for Lashes’ onto a Sennheiser e 935 for her live performances, with keyboard player & backing vocalist Laura Groves also using an e 935. As well as the vocals, the BFL stage set-up uses 904’s, 604’s and 609’s on guitar amps and drums. I also used Sennheiser 441, 421 & 906 mics during the recording sessions of ‘The Bride’, Natasha’s recently Mercury-nominated album, most of which was mixed at my Ice House Studio in Dorset.”