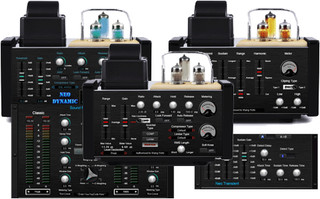 Sound Magic has announced Dynamic Bundle, a collection of 5 dynamic processing plug-ins at a discounted price.

Neo Loudness is a comprehensive tool designed to control loudness. Neo Loudness not only includes traditional compressors and limiters, but it also features a new type of Maximizer.

Neo Preamp is reminiscent of a vintage channel strip which not only boosts or cuts the audio signal, but also add “things” to it. People like to remember that this or that particular vintage gear added a certain color to their recordings – and this is exactly what Neo Preamp does.

Neo Transient is a new concept for level independent dynamic processing. Unlike common compressors and limiters, Neo Transient reacts on Transients – those short peaks in the audio signal – rather than the overall signal loudness level. In this way, Neo Transient creates an entirely new way to process your tracks.

The bundle is available for purchase for 199 EUR. Existing users who have already purchased any plug-in in the dynamic bundle can upgrade by paying the difference.