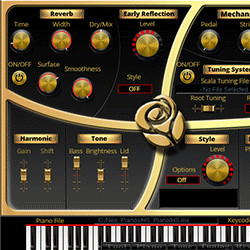 Sound Magic has announced the release of the Fazioli Rose, a virtual Fazioli “Brunei” concert grand piano instrument for Windows and Mac.

Fazioli “Brunei” is the most expensive concert grand piano. Fazioli, base in Italy, is considered to produce the best sounding grand pianos nowadays. Based on its famous Fazioli F308, the 10 foot concert grand model, Fazioli “Brunei” is decorated with flowers in mother of pearls, features semi-precious stones in various types. Not only the appearance changes a lot, but also Fazioli “Brunei” was specially tuned by factory engineers to achieve a unique sound, it has a deeper bass and mellower in sound compared to F308. By using the best Microphones and AD/DA converter nowadays, we successfully captured Fazioli “Brunei” unique sound. And after almost 1 years’ modeling processing, we finally get an vivid instrument with a rather small size compared with other sampled instruments.

Neo Piano features a custom built Hybrid DFD/RAM system. It is a very flexible system which can be optimized for different playing applications. If you are using an old system with low RAM, DFD will work well. If you are using a top performance 64-bit system with plenty of RAM, you can choose to play Neo Piano totally from RAM. A balance of DFD and RAM samples can be utilized to optimize general performance. In All cases Sound Quality remains at the highest level. For live stage performances, the entire piano sample set can be loaded into RAM, removing any worries about OS interference with Hard Disc access. For Studio and Composition use, DFD is ideal with modern computers.

A major breakthrough in Neo Piano Engine is the resonance engine. Every Grand Piano has a very large soundboard which reflects sound which resonates together with the piano’s wood body. This is a continuous process and makes every note sound unique. In order to simulate this behavior, Sound Magic first captures multi angle IRs from the soundboard, then applies new technology to convert those IRs into Resonance Engine Algorithms. The result is a concert hall sound reproduction full of life.

Style Designer is a special function which allows you to quickly and easily set the piano’s musical style, such as pop, jazz, rock, classical or soft. When you move the style level dial, it will change several internal parametric.