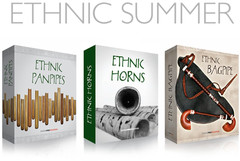 Now you can get all three Ethnic instruments (Ethnic Bagpipe, Ethnic Panpipes, Ethnic Horns) for the price of two.

Good news for existing customers: anyone, who has already purchased two “Ethnic” instruments for the full price, will get the third for free!