Spectrasonics has announced the winners of its worldwide OMG-1 Contest.

Over 400 entries for the contest were submitted from 68 different countries, with a very wide diversity of musical styles. The goal for each contestant was to use the sounds from the Bob Moog Tribute Library in a creative and inspiring way. The company reports that the Contest and the Library have been able to raise record-breaking funds for the Bob Moog Foundation to support their innovative projects.

Eric Persing, Spectrasonics Creative Director and Founder, said, “With the hundreds of creative entries from around the world, the OMG-1 Contest was an incredible success! The overall quality of all the entries was so much higher than we expected, it was extremely difficult to choose the winners.” 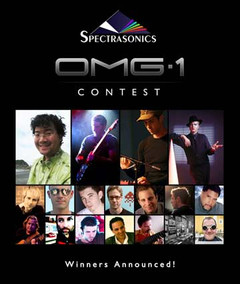 The Grand Prize of Persing’s custom-built OMG-1 synthesizer has been awarded to Torley Wong of Washington State, who submitted an entire album’s worth of music-15 pieces, over one-hour in total-exclusively using the “Bob Moog Tribute Library” in Spectrasonics’ Omnisphere software synthesizer for the tonal elements of his album. The one-of-a-kind OMG-1 synthesizer will be presented as the Grand Prize to Mr. Wong in a special event at the ‘Moogfest’ in Asheville, North Carolina in October 2011.

In fact, so many great pieces of music were submitted in the contest that three other major winners were announced as well, winning prizes generously donated by hardware synthesizer manufacturer Moog Music:

Fifteen additional contestants were recognized with “Creative Excellence Awards” and have their music featured on the Spectrasonics website.

Softube announces sale: up to 50% off plugins