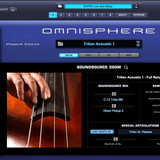 Spectrasonics has released version 1.1 of Omnisphere, the flagship virtual instrument, which combines a wide variety of hybrid realtime synthesis techniques, a massive library of remarkable ‘Psychoacoustic’ sounds, and many innovative features.

On the heels of the release of their epic new Trilian® Total Bass Module virtual instrument, Spectrasonics has announced the release of version 1.1 of their award-winning Omnisphere® Power Synth – featuring native 64-bit Windows support, core library integration with Trilian and more. The new v1.1 is also Mac and Windows 32-bit compatible. For users who have both virtual instruments, sounds from Trilian can now be opened inside Omnisphere – allowing deeper editing of the Trilian sounds, as well as the creation of layers and splits with both instruments’ sounds in the same environment.

Omnisphere is available to purchase for an MSRP of $499 USD / 379 EUR. The v1.1 update is free for all registered users and is now available as a download from Spectrasonics website.