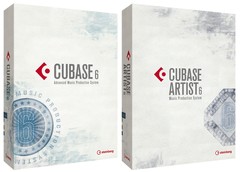 Encompassing refinements and new capabilities, such as extended composing features available in VST Expression 2**, phase-accurate multitrack drum editing** plus a wealth of effects and instruments, Cubase 6 and Cubase Artist 6 are now shipping and will be available at dealers and in the Steinberg Online Shop for EUR 599*/GBP 508* and EUR 299*/GBP 253*, respectively.

“The sixth version marks a significant release for Cubase,” comments Helge Vogt, Steinberg’s product marketing manager for Cubase. “With over 25 years of experience in creating the very best in music creation software, we at Steinberg are elated to unveil the latest incarnation of Cubase at this leviathan event early in the year. By funneling our entire engineering expertise into Cubase 6 to give our customers better production solutions than ever before, we’ve been able to solidify the position of Cubase as the world’s most popular music production system today. It looks better, feels better and works easier than ever before — Cubase is simply the perfect go-to audio workstation for all styles of music,” Vogt continues.

Cubase 6 and Cubase Artist 6 offer enhanced workflow features within the Project window. The newly introduced Track Edit Groups option** refines the work with multitrack recordings, allowing related events on multiple tracks to be grouped and edited simultaneously, while the new Lane Track offers convenient multitake comping for selecting and consolidating audio parts to form the perfect take. The redesigned transient and automatic tempo detection, phase-accurate audio quantization and drum replacement functions incorporated in Cubase 6 help to smooth out any glitches in live-recorded drum tracks.** The Key Editor has further been enhanced with an Inspector panel and the groundbreaking Note Expression feature for creating and editing multiple controller values on a single-note level.** Also included is the new Dynamics Lane, which allows real-time listening of dynamic changes while automatically in sync with dynamic notations from the Score Editor.**

“With the concurrent release of VST 3.5, we’re taking VST to the next level, introducing a revolutionary new approach to controlling musical articulations note by note. It’s called Note Expression and is part of VST Expression 2 which radically simplifies work with large orchestral libraries for symphonic or film scoring. There’s also our virtual guitar amplifier and effects suite, VST Amp Rack, ready to infuse guitar tracks with the right tone in both Cubase and Cubase Artist. So many quality effects, virtual instruments and cool content right out of the box permit Cubase to scale beautifully between the needs of bedroom music producers and chart-topping studio professionals,” remarks product marketing coordinator Carlos Mendoza Rohde on the new features.

Both Cubase 6 and Cubase Artist 6 feature the VST Amp Rack plug-in, which comes with seven amp models, sixteen stomp boxes, six speaker cabinets and two microphone types. A great benefit is added by the HALion Sonic SE virtual instrument, which comes with more than 900 production-ready sounds in Cubase and 550 sounds in Cubase Artist, and the second edition of LoopMash, now boasting more than 20 MIDI-controllable live and slice-based effects. The significantly redesigned graphical user interface minimizes eye strain, which is customizable in its intensity, brightness and tone color settings. Both new Cubase versions offer 64-bit support for Windows and Mac operating systems, enabling a performance boost for using more tracks and bigger sample libraries. A few of the enhancements that round out Cubase 6 and Cubase Artist 6 are global project compatibility between Cubase 6 derivates, the new time-stretching algorithms and more than two hours of in-depth video tutorials in high-definition quality.