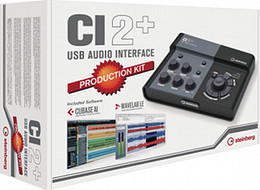 The featured Advanced Integration technology facilitates every phase of the music creation process, from the initial idea through to the final mixdown.

With the CI2+ Production Kit, Steinberg is offering the ultimate entry-level recording and production solution for guitarists, singers and podcasters.

“The CI2+ Production Kit comes with a quality interface and two great music software applications that are optimally tailored to each other. It’s simply the perfect out-of-the-box experience, and that at an unbeatable price!” commented Stefan Schreiber, product marketing manager at Steinberg.

The CI2+ features USB connectivity at a 24-bit resolution and a sampling rate of 48 kHz, providing two microphone inputs with balanced XLR/jack combo connectors, high-quality microphone preamps and onboard +48V phantom power. Its panel boasts level and mixing controls alongside transport control buttons and the prominent AI Knob for adjusting many functions in the software. The dedicated high-impedance switch for the first channel allows direct connection of electric and bass guitars.

WaveLab LE 7 offers a suite of audio editing tools, making it the immediate application to record and edit audio material. With its Internet publishing feature, the online dissemination via podcast is as easy as it gets.

The CI2+ Production Kit is available to purchase for a suggested retail price of 249 EUR, including German VAT, and £220 GBP, including British VAT.