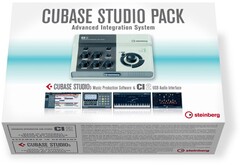 Steinberg has announced the release of Cubase Studio Pack, a bundle comprising the Cubase Studio 5 music production system and the CI2 interface and controller unit.

The Cubase Studio 5 music production system comes with a wealth of features for composing, recording, editing and mixing. With PitchCorrect, Cubase Studio 5 provides an automatic intonation control of vocal and monophonic recordings. Groove Agent ONE and Beat Designer deliver all things beat-making. Further incentives are VST Expression, the many VST effects plus the expanded HALion ONE sound library.

CI2 is an interface and controller, housing two microphone preamps with phantom power behind a pair of Line/Mic XLR combo jacks, one of which is switchable to high impedance for electric guitars. The CI2’s console is dominated by the innovative AI Knob which allows the user to browse through the project and control Cubase parameters.

By bringing the Cubase Studio software and CI2 hardware together, Cubase Studio Pack scales beautifully from entry-level to the most advanced requirements, making this audio recording and production solution extremely attractive to a vast audience of prospects, especially at this price point.

The Cubase Studio Pack for PC and Mac is available to purchase as long as supplies last for an MSRP of 449 EUR / £382 GBP (~20% off the regular-priced single-product purchases).