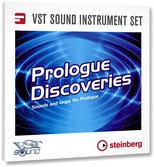 Steinberg has announced the release of Prologue Discoveries, a VST Sound Instrument Set for Cubase and Sequel.

Instantly accessible by taking advantage of Steinberg’s MediaBay and VST Sound technologies through the Prologue polyphonic subtractive synthesizer featured in the fourth and fifth versions of Cubase and Sequel 2, the new add-on holds over 180 VST 3 sound presets and more than 200 MIDI loops conveniently arranged in categorized construction kits.

Created by professional sound designers in collaboration with Steinberg’s in-house planners, Prologue Discoveries is an expansion set that will pique the interest of both aspiring and tenured producers of dubstep, glitch-hop and grime, but also holds a wealth of sounds for electro, techno and minimal.

Prologue Discoveries is now available as download from the Steinberg Online Shop for 29 EUR / £24 GBP (prices may vary regionally).