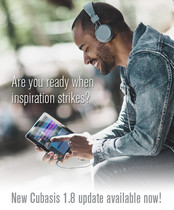 Steinberg has released version 1.8 of its Cubasis app for iPad.

Version 1.8 is the biggest update so far and includes countless fixes, improvements and new features that help you to capture your songwriting ideas while on the move.

The 1.8 update adds numerous features such as automation, MIDI CC, program change and aftertouch support alongside a mixer-side global control panel, a phase inversion plug-in for audio channels and much more, making Cubasis the go-to choice when inspiration strikes.

Plus, there’s also a new version of the Cubase project import extension available for download.