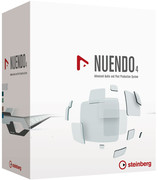 Steinberg has released version 4.3 of Nuendo, the fourth maintenance update for the audio- and post-production software for Windows and Mac.

“The overall goal for Nuendo 4.3 was to further improve the stability of the program. We’ve not only concentrated on addressing open issues concerned with File Import, Surround, Solo/Mute and Session handling, but have also enabled Cubase 5 projects to be opened in Nuendo 4.3. Our thanks goes out to our valued customers for their input,” comments Timo Wildenhain, marketing manager at Steinberg.

“Our new synchronizer will be a benchmarking machine. The overall functionality and integration with Nuendo is absolutely outstanding,” Wildenhain continues. The Nuendo SyncStation is a joint-development of Steinberg and engineering legend Colin Broad.

The Nuendo 4.3 update is free and available as a download from Steinberg.