PreSonus has announced its new StudioLive AR USB hybrid mixers, lightweight, versatile, and feature-rich mixers that make it simple to mix and record. 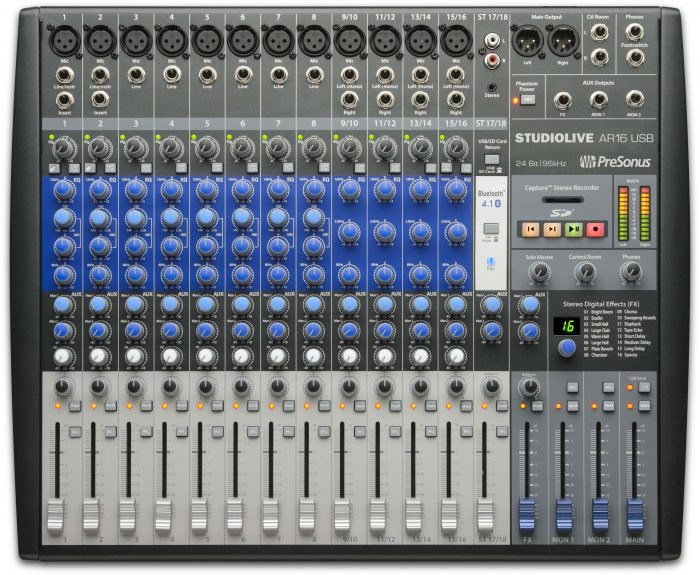 StudioLive AR USB mixers are equipped with a USB 2.0 audio interface that can capture all input channels, plus the main mix, to a Mac or Windows PC, with 24-bit, 96 kHz quality. As with all PreSonus mixers and interfaces, StudioLive AR USB mixers are tightly integrated with state-of-the-art recording software. Record with PreSonus’ Capture™ live-recording software, then edit in award-winning Studio One® 3 Artist DAW (recording and production software); both are included free.

For applications where connecting a computer is inconvenient, every StudioLive AR USB mixer comes equipped with an onboard stereo SD recorder that lets you record the main mix without a computer—just hit Record and go. You can also use the SD recorder to play up to 32 GB of MP3 and .WAV files for hours of program music or backing tracks without needing a computer.

The new hybrid mixers feature the PreSonus Super Channel, which allows you to connect four stereo analog and digital sources at once, enabling you to use the mixer with high-tech devices. Plug a media player into the Super Channel’s unbalanced RCA and 1/8-inch stereo inputs and play stereo audio from the onboard SD recorder or from your USB-connected Mac or Windows PC. Use onboard Bluetooth 4.1 to pair your phone to your StudioLive AR mixer and instantly have wireless access to your music library for break music, backing tracks, or ear-training. Have a song you want the rest of the band to learn? Pair your phone and start rehearsing!

StudioLive AR USB mixers are packed with the connections and features needed to mix and record live, in the studio, and in rehearsal, including Class A mic preamps, two instrument inputs, three-band semi-parametric EQ, pan, mute, and PFL solo. In addition to the main outputs, you get monitor mix outputs with dedicated buses—great for feeding stage wedges, a headphone amp, or an in-ear system. Since the StudioLive AR USB is also a studio mixer, you get control-room outputs with level control to feed studio monitors.

Each StudioLive AR USB mixer has an internal stereo effects processor with 16 presets, including an assortment of room, hall, and plate reverbs; chorus and delay effects; even a preset that emulates an acoustically treated studio room to provide a warmer, more intimate tone. A dedicated effects return, complete with master level fader and monitor sends, lets you adjust the amount of the effects in your main and monitor mixes. You can even bypass the effects with an optional footswitch.