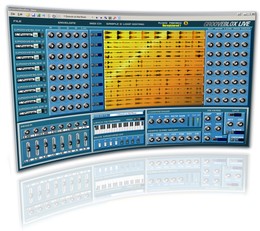 Supersynths has updated its GrooveBlox Live groove synthesizer to version 1.1.

GrooveBlox Live is a live performance plugin that allows anyone with any kind of hardware to create, manipulate and perform kick butt grooves with a minimum of fuss and a maximum of FUN!

The GrooveBlox Live core library includes a combination of 350 loops in five categories. The entire collection is only 388 megabytes, so it can fit on pretty much any kind of device. That means you can store it on your phone, tablet or laptop and not waste a ton of valuable space. It also means it takes almost nothing to download. However, the library is top quality looped grooves, drum beats, arpeggiated synths, basslines, guitar parts and all manner of cool and current effects.

GrooveBlox Live for Windows (VST) is available to purchase for $40 USD. The update is free to current GrooveBlox Live users. Supersynths has announced that additional GrooveBlox will be released in the coming weeks, adding more grooves, arps, effects, bass or sets to the core product.