Synmergic has released of beta version of Loop Editor, a VST plug-in that focuses on creating and editing musical patterns online. 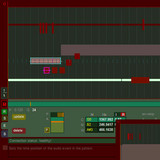 Your on going music project remains private, having its own tempo, VST instruments and FX…, in other words having its own unique musical character, while at the same time everything you do in this plugin is by principle public. The plugin connects directly to the synmergic server where the musical patterns exist and allows you to edit them as part of your project by joining the available creative sessions. Changes made to these patterns are directly reflected to anyone who uses them in his own project.

Each creative session comprises audio events which form the musical pattern. The patterns are edited in common by the participants of the corresponding creative session. Although the musical patterns are shared among various projects, this plugin is not about sharing static audio loops or bits of music, but instead it is about interaction and joining the creative process of others.