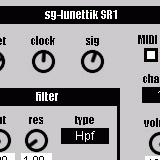 synthgeek has released the Lunettik series, a collection of small noisemaking devices inspired by Lunettas.

In a nutshell, Lunettas are simple circuits, often based on CMOS logic chips. To quote mosc from the electro-music forums, “These machines are named after Stanley Lunetta of Sacramento, California… Lunettas are very simple, digital, noisy, quirky, and lots of fun.”

Note that these are not meant as emulations of any specific circuit, they are just inspired by the concept. Like the circuits which inspired them, they don’t necessarily do things “right”, but they generate interesting sounds. If you like noisy, droney, and/or buzzy stuff based on square waves, check ’em out. The first pack includes three simple generators: SR1, OR1, and BC1, which are named after the logic functions used in their design (Shift Register, OR gate, and Binary Counter).

The Lunettik series plug-ins are available as a free download for Windows PC (VST).