Moog Music has announced that its limited re-issue run of the Minimoog Model D synthesizer is coming to a fast end.

To commemorate the close of production of the world’s first portable synthesizer, Moog invited prolific producer Mike Dean to spend one day creating a new Minimoog Model D track at the Moog Factory in Asheville, NC. 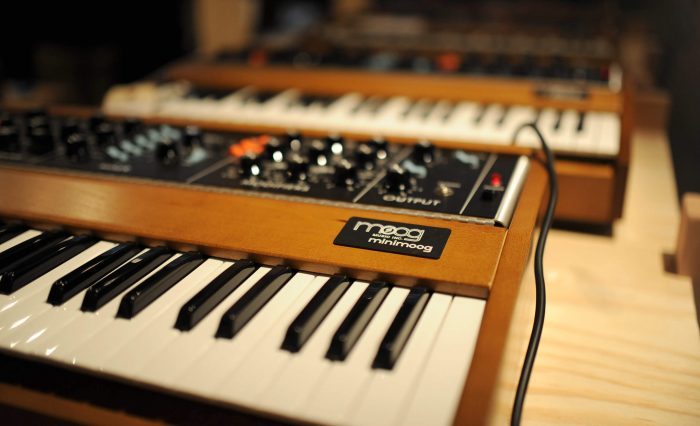 Dean wrote and recorded the new track “Three Jewels” on the Minimoog build line while Moog production engineers crafted some of the final Model D synthesizers beside him. With the track completed in just five hours, Dean walked out of the Moog factory with its employees at the end of their shift–last year Dean spent a weekend at the Moog factory, crafting “Grande Faucon” in 48 hours.

This re-issue project has truly been a labor of love; from our deep dive into the varying designs of the original Minimoogs, to the restoration of classic production techniques required to adhere to 1970s specifications–we even had the opportunity to collaborate with our supply partners to reissue long-discontinued transistor technologies that were crucial to the Minimoog’s legendary sound.

Through this adventure, we’ve had the honor of communing with innovative artists like Gary Numan, Mark Mothersbaugh (Devo) and the late Bernie Worrell (Parliament Funkadelic), whose intrinsic relationship with these circuits opened a cosmic channel through which they could share their love with the world, while also inspiring a new generation to explore the Minimoog Model D.

Since its introduction in the early 1970s, the Minimoog Model D has altered the course of music. It provided artists with a completely new type of instrument; one through which they could focus and explore the infinite sonic energy of analog electronic sound. And then it was gone–set aside in the 80s as the promise of digital synthesis moved in. Then last year, the Minimoog mothership returned into orbit at Moogfest and the iconic instrument once again resumed production at the Moog Factory. Not simply a story of life coming full circle, but rather an example of life’s upwardly spiraling nature. We find ourselves at once returning to a point in the past, but with the perspective and knowledge of the present, forever on a path to the future.

The Minimoog Model D has been a part of our daily lives here at the Moog Factory for over a year now, and is woven into the fabric of our history. As we draw closer to the end of this limited production run, we reflect on this labor of love as one of the most rewarding and joyful projects we have ever undertaken.

Thank you for sharing in this creation and joining us on this magical journey.

Contact your local authorized Moog dealer or distributor to purchase one of the final Minimoog Model D analog synthesizers.

Deal: EPIC Soundlab Everything Bundle for Kontakt & Reaktor at 79% off