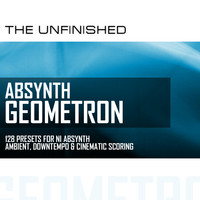 The Unfinished has announced Absynth Geometron, a collection of 128 beautiful and dark sounds aimed at ambient, downtempo and electronic film scoring.

The idea behind Geometron is global-friendly post-club, early morning sounds. Think riding an empty metro train in Tokyo at 3am, waiting for the sun to rise over horizon in downtown Buenos Aires, or sitting on a Bali shore watching the fishermen go out for their first catch of the day.

The soundset is available to purchase at £14.99 GBP. A demo pack of 20 sounds can be downloaded free of charge. Geometron requires Absynth 5 (some sounds will not work in Absynth 4) and uses the .nabs format.

The Unfinished has also launched a Christmas Sale, offering a 50% off everything (except Geometron) including some new bundles.