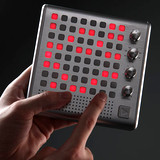 If HAL 9000 mated with R2-D2 and their electronic offspring was tutored by Kraftwerk it would probably end up something like the Bliptronic 5000 LED Synthesizer.

At once a minimalist musical plaything and a hardcore old-skool synthesizer, the Bliptronic defies categorization as it belts out 8-Bit style style tunes from its grid of glowing buttons.

You’ll notice sound similar to a retro Casiotone with an interface not unlike a simplified Yamaha TENORI-ON… if that makes any sense. Either way, once you start touching the keys of the Bliptronic you’ll be hooked by it’s simple pattern-based approach to music.