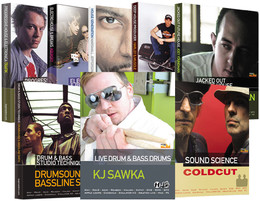 The Loopmasters’ Artist Series features exclusive collections of royalty free samples from some of the best known producers worldwide.

Originally launched in Autumn 2007, with the release of Aquasky and Trafik, the Artist Series has grown considerably throughout the past year with eight titles now available and plenty more planned for 2009.

The latest producers to join the Artist Series are …

… and to celebrate the release of these three new titles, we’re giving you the opportunity to win one of four Artist Series bundles each containing all eight DVD titles and worth £320!

All you need to do is answer this simple question: Which two titles were the first to be released in the Artist Series?

The competition is open to anyone, anywhere and the closing date for entries is 28th February 2009. Winners will be announced on or around the 1st March.