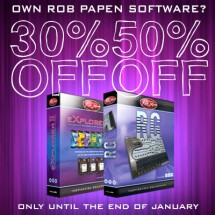 Time+Space has announced that it giving existing users of Rob Papen synths or effects plugins the chance to boost their Papen arsenal with some exclusive offers available until 31st January.

50% off RG – Described by Computer Music magazine as ´inspirational´ and ´peerless´ this Rhythm Guitar synth offers electric and acoustic guitar grooves with sequencer and synth effects. If you already own a Rob Papen title, you can buy RG for just £39.47 / €49.50.

30% off eXplorer 2 Upgrade – the entire collection of Rob Papen virtual synths and effects plugins for a mere £234.50 / €419.00! Predator, Blue, RG, SubBoomBass, Punch, and Blade plus RP-Distort, RP-Delay and RP-Verb will all be at your disposal and you´ll be saving a massive £529 compared to individual purchases of these titles.

To take advantage of this offer, purchase RG or the eXplorer 2 Upgrade with the discount at timespace.com and enter the serial number or registered email address of your existing Rob Papen title in the Comments Box as you check out.