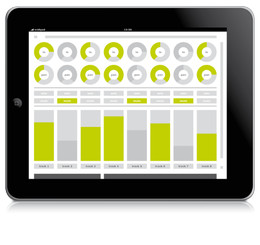 Tobias Erichsen and Thomas Tautz have announced midipad, a multi-touch midi controller app for the iPad/iPhone.

The striking feature of midipad is its ability to directly communicate via network-MIDI-protocol. So there is no need to install any communication-peer-software on the Mac! Simply plug-and-play via Apple Bonjour – wireless. This kind of connectivity has not been used in any similar iphone-software.

This multitouch-capable midi-controller-application communicates with your Apple Mac your Windows-based PC and even standalone hardware-synths via Wifi.

So you can control all of your music-applications with just a few finger-gestures without having to sit at your desk and no annoying cable.